What Fyre says about us 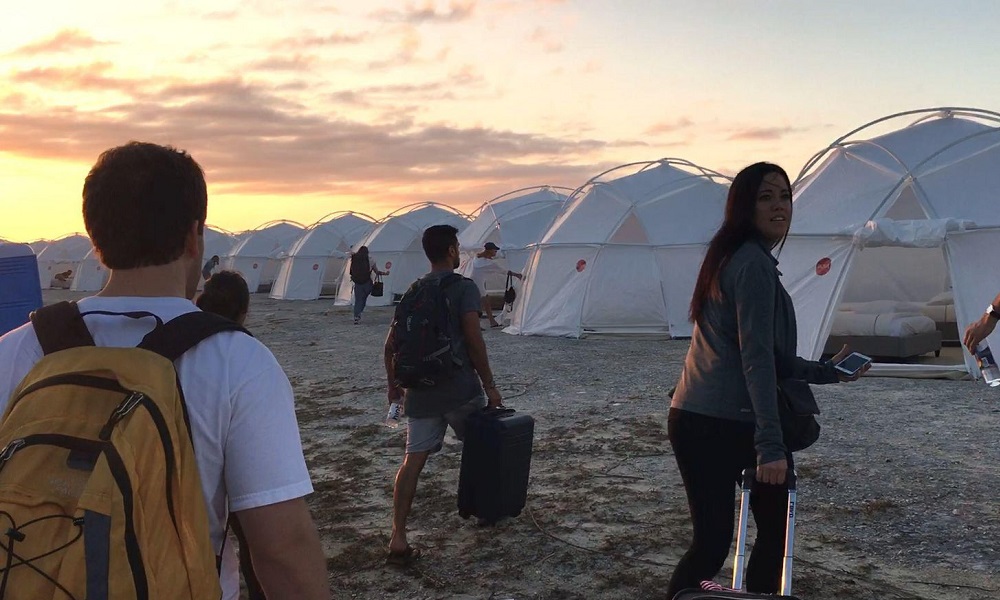 I should make the most of my current living situation –Paris, you wonderful capital of the arts !- and spend more time enjoying the precious independent cinemas – you should too -, try and defend them from the fierce Netﬂix competition. But I admit it. There I was, at 1am, in front of my comforting computer screen. And before I start rambling on, I should clarify that I do ﬁnd that the online streaming platforms have their interest. For example, Netﬂix has succeeded in releasing in November an edited version of Orson Welles’s until now uncompleted movie : The Other Side of the Wind (well actually, this example only shows the interest of having enough money to be able to pay a good team to do it, but…). Also interesting, it appeared to me that lately Netﬂix has released more and more content about our relationship with technology, image, alterity nowadays. Indeed, in addition to their production of Black Mirror, they for example put online a quite depressing documentary, the American Meme, in which famous and rich inﬂuencers actually succeed in making us feel happy about only being our common boring selves. But the documentary that I wanted to discuss is of course the one that has received a lot of interest after its release, Fyre : the Greatest Party that never happened. I will not go on about its content for too long, for I am sure you already have seen numbers of articles about it , but basically, it explains how a neo-liberalist shark, Billy McFarland (almost?) succeeded in making lots of money – so far, nothing surprising – on a scam, 21st century version. In 2016, he decided to organize an enormous dreamy festival in the Bahamas to promote an app, Fyre. The only thing that had been ‘real’ was the video advertising it that was full of very famous models, paradisiac landscapes, lies and had cost in itself billions of dollars, along with the infamous mysterious photo of an orange square that had been posted on hundreds of inﬂuencers’ Instagram accounts at the exact same time. Only problem, in the end the festival never occurred and had to be cancelled because it was poorly organized. Well, if we can qualify as ‘poorly organized’ a brilliant scam that should have worked but did not. The most important is that in the end, rich people but especially famous inﬂuencers ended on a lost island, with no electricity, in tents, with wet mattresses and no plane to come back home to the comfort of their privileged lives.

Of course, the documentary about Fyre is really interesting in the way it brutally demonstrates the negative extent that our obsession with creating a perfect image for ourselves – which, by the way, can only reﬂect the emptiness of its true reﬂection – can take. I think it also did a good job in showing how destructive corporate America and its ‘kings’ can be, in a whole other ﬁeld that just perpetuating inequalities. Fyre also shows through the chief organizers, how those people with money really believe that because they know how to sell, they are able to have access to everything , are able to do anything. Fyre Festival seems like just another disastrous CEO whim, who thought he could play basketball like Michael Jordan just by buying a NBA team. It displays that not only does advertising make you buy, but that you can now even buy only the advertising in itself.

But what I was most keen to talk about, was our reactions to Fyre. After having seen the documentary, I searched the internet for more information. There were stories about the complaints made by Festival attendants, the imprisonment of Billy McFarland, Youtube videos made by inﬂuencers who were there… But what interested me the most was a fact that singled out Fyre even more: it was the reactions of internet users right after the disastrous festival. On Twitter especially, which has apparently become the number one source for public opinion, there had been a tendency to mock with pleasure and disdain the experience of Fyre Festival attendants. A phenomenon that I can only simply resume by this phrase: ‘The rich kids got what they deserved’, because they had paid thousands to live an experience which was not even real. So what ? They had to eat a bad sandwich ? Most of us have to eat one everyday at lunch break. They only had tents to sleep in ? Well, welcome to the real festival experience ! They wanted to feel superior to us by going to an expensive festival in the Bahamas which most of us cannot afford and take pretty pictures ? Karma !

Don’t misinterpret my following words, I think those were entirely understandable and somewhat legitimate reactions. What bothered me more is that it seemed to overshadow the real lessons of this ‘festival scam’, and the persons that should be held accountable for it. To be fair, it may be more obvious to realize it now, after the releasing in 2018 of the two documentaries about it and the other elements they exposed.

Nevertheless; I had the uneasy sensation that these reactions supported the idea that those festival attendants were guilty of being too gullible, instead of being the victims of deceptive marketing. That they were responsible for having wanted to rent or being offered prohibitively expensive villas in the Bahamas to attend a festival, instead of having been the victims of a scam. Some thought that the mean Instagram celebrities in the ad video should be held responsible for not having veriﬁed what they were advertising for. And maybe they do. But shouldn’t we be more attentive to the fact that thousands of people were ready to buy tickets to a festival only because there was a short video with famous models on it ? To the fact that inﬂuencers are being used to make us buy because they do succeed in inﬂuencing all of us, and only through a screen and through the face they choose to present to the world. The real question is this: if the tickets hadn’t been that expensive, wouldn’t we have bought them to live this seemingly dreamy experience ? Isn’t the saddest part of it all that our dreamy experience (and I mean many of us, not only those who were able to pay for it) is to go the Bahamas and try and live, for just a weekend or two, the same fun life that famous people seem to experience on some video ?

I think that what is important to learn is that we have less and less opportunity to decide to do so or not, because we want and need to be part of this society. The alarming fact is not that some ‘dumb’ people were ready to pay great amounts of money without knowing what they were going to get, it is that today it seems like we have to offer some representation of ourselves on the internet just to exist.

Fyre is just a bigger version of what was already happening on Instagram, regarding fashion, body image, travel experiences, culture, career success. Do we try to have these incredible experiences to be able to enjoy them, or for others to be able to see that we appear to enjoy them ? And what if the festival had worked ? Wouldn’t the app have worked as well ? The app Fyre is in itself the illustration of the superﬁciality of celebrity, it planned to offer a service to book celebrities and pay them just to be with you for a photo or a night, depending on the price you were ready to spend on them. People are creating apps that offers you a service. But famous people are for sale only because you are ready to buy them. The very inﬂuencers which had been made fun of after the Fyre Festival are the ones we follow on Instagram, we support, we want to be.

Maybe we haven’t bought these tickets, but we have bought the same clothes, the same phones, the same lifestyle.
By mocking these people, it seems we have forgotten the real danger of the way our society functions, and the real matter aroused by Fyre, which is that a CEO, a young product of the American Dream, an intelligent and successful educated businessman, was able to almost get through with this. If the public opinion hopes for McFarland to stay in prison for a long time, many people still aspire to the exact kind of life he had.

And you, and I, we spend hours watching movies, tv shows, series about those ‘bad guys’ like Billy Mcfarland, but also Pablo Escobar, or even Ted Bundy. But are we obsessed with their lives for the good reasons ? What conclusions do we draw from their stories ? It is a good thing that the story about the bad that businessmen like McFarland can do is now on streaming for all of us to see. But what about those who did not fail ? What about those who did not get caught ?

What Fyre says about us was last modified: février 12th, 2019 by AnnaK